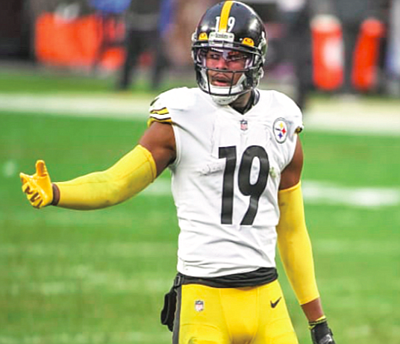 The Ravens will have the opportunity to make some key additions to wide receiver by way of free agency this season. JuJu Smith-Schuster from the Pittsburgh Steelers gives the Ravens a viable option in the slot. He is a sturdy, reliable target that could become a safety blanket working the middle of the field for Jackson. Nic Antaya/Getty Images

Jackson rushed for 1,000 yards for the second consecutive season. He was closely followed by rookie running back J.K. Dobbins who picked up 805 yards and veteran Gus Edwards who finished with 723 yards.

As a team, the Ravens led the NFL with a 191.9 rushing yards per game average. However, the passing game ranked dead last with a 171.2 average. It’s pretty obvious that there needs to be a marked improvement in the passing game to balance out the offense.

The problem for Baltimore’s passing game was two fold. Offensive coordinator Greg Roman’s scheme was simplistic. The team also suffered from the lack of a true number one wide receiver.

Duvernay played a limited role as a rookie and finished with 20 receptions for 201 yards. DeCosta also signed veteran receiver Dez Bryant during the season. That didn’t pan out for a variety of reasons. The Ravens will have the opportunity to make some key additions to the wide receiver by way of free agency this season. There are an assortment of veterans on the market that would add immediate help for Jackson and the passing game.

DeCosta laid out what he will be looking for in possible free agent candidates.

Golladay only played in five games last season and posted 20 receptions for 338 yards and two touchdowns. This cam a year after a season in which he caught 65 passes for 1,190 yards and 11 touchdowns and made the Pro Bowl. Adding a young, ascending player like Golladay would be an excellent move. Golladay’s 6-foot-4, 214-pound frame presents a big catch radius for Jackson to target.

Davis finished 16 yards should of his first 1,000-yard season in 14 games last year but still finished with a single- sesson career high 986 yards. He caught 65 passes to tie his career high in a season. Davis scored a career-high, five touchdowns as well.

Signing Davis presents the Ravens with a player whose arrow is pointing up. Davis also matches the Ravens’ physical mentality as a ball carrier and when blocking in the run game.

JuJu Smith-Schuster, Pittsburgh Steelers— Smith-Schuster gives the Ravens a viable option in the slot which would be an upgrade from Willie Snead. He is a sturdy, reliable target that could become a safety blanket working the middle of the field for Jackson. It also wouldn’t hurt to take a premier player from the rival Steelers.

The fifth-year receiver finished with 97 receptions for 831 yards and nine touchdowns. Smith-Schuster’s potential was truly shown in 2018 when he caught 111 passes for 1,426 yards. That’s the player the Ravens would hope to get of they signed Smith-Schuster.