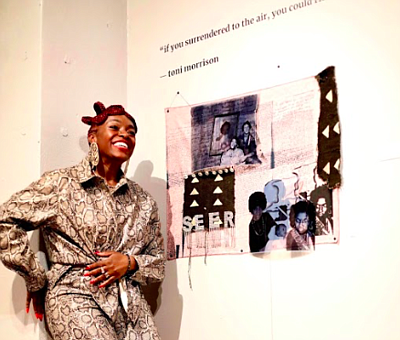 Necessary Tomorrow’s is an initiative described by its founder, Sharayna Ashanti Christmas, as a curatorial experience with a mission of highlighting artists from Baltimore and beyond opened two new exhibitions at The Eubie Blake Cultural Center on Saturday, March 6, 2021 with a small physically distanced art viewing and reception.

“I don’t want to dictate what viewers will get from we make do // wit wat we got and Draped in Dark, the titles of the shows themselves,” said Christmas, when asked what she hopes folks will take away from her curated exhibition. “I want them to take the meat and leave the bones.” 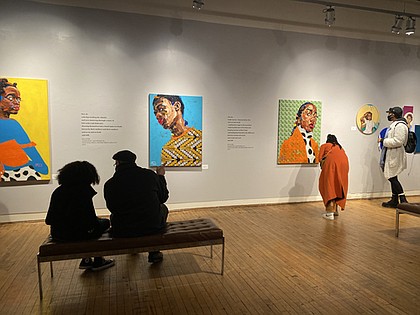 Visitors browsing we make do // wit wat we got

Necessary Tomorrow’s was founded in 2017 by Christmas, a self-starter, social entrepreneur, creative and producer who for over the last 15 years has served in many capacities as a performer, creative director, facilitator and collaborator.

One of Christmas’ first non-profit initiatives Muse 360 Arts finds its home at The Eubie Blake Cultural Center, which has been a staple in the Baltimore creative and performing arts community for decades. The relationship between Christmas and the long-standing cultural center made the decision to hold her latest exhibitions there an easy one. Upon viewing, it’s evident that both shows are a rich cultural gift to the arts community in Baltimore.

Necessary Tomorrow’s holds a tradition of putting a spotlight on bold, fearless Black creatives in Baltimore like Nia June, a multidisciplinary artist focused on poetry and cinematography. 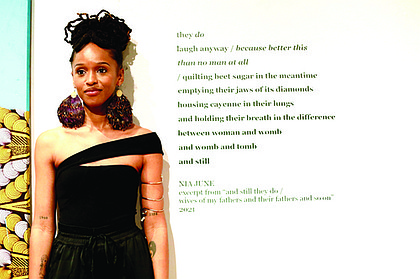 “I feel seen, supported, protected, and inspired. To be completely honest, I walked through the exhibition as we were setting up and cried— I’ve never seen myself, seen us like this before,” said June, when asked about the show and her relationship to Christmas.

June also said Christmas has set an example— not just in the current exhibition but in all of her work— on how to truly be in community and how to bring Black women home with their art.

June is joined by other young women like 24-year-old Diamon Fisher who is an up-and-coming curator whose work is also featured and inspired by Black experiences and endurances throughout history. June and Fisher were called on by Christmas for the show alongside herself and three other talented creatives including an illustrator, Megan Lewis who has been charged with creating larger-than-life illustrations, murals, and campaigns for HBO, the US Open, and more. Bilphena Yahwon a Baltimore- based writer, abolitionist and restorative practices practitioner born in Liberia, and Sha-Shonna Rogers a 19-year-old multidisciplinary artist and freshman at Morgan State University from West Baltimore all join the new exhibition with their coveted works. 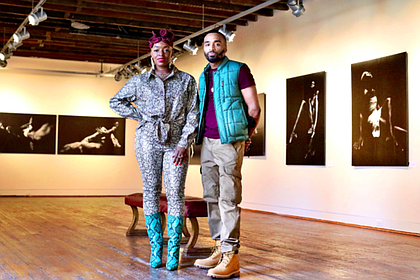 While the roster of artists for we make do // wit wat we got is all women, Christmas was sure to include the masculine energy in The Eubie Blake gallery space by providing the platform and opportunity for Kirby Griffin a self-taught cinematographer from the West Baltimore for his debut solo exhibition entitled Draped in Dark.

“Whilst in the gallery you can see how I might employ my keen eye and methodical use of chiaroscuro to capture the depths of Black personhood and humanity,” said Griffin, the Baltimore bred director and photographer.

Chiaroscuro, in art, is the use of strong contrasts between light and dark, usually bold contrasts affecting a whole composition. “Kirby’s Draped in Dark represents the fluidity, movement and brilliance in Black skin,” Christmas said.

Gallery hours and more information about the exhibition are available @instagram.com/necessarytomorrows/.