How To Watch The Democratic Debate Tonight

The stakes are high for candidates participating in Tuesday's CNN/New York Times Democratic debate, as the presidential hopefuls look to remain competitive in the crowded primary field.

While black women get breast cancer at a lower rate than white women, we are 42 percent more likely to die from it. And young black women, those under 35, are twice as likely as white women to get breast ...

International Opera Star Jessye Norman Died Monday At The Age Of 74, According To Her Agent.

"Jessye Norman was one of the greatest artists to ever sing on our stage," said Metropolitan Opera General Manager Peter Gelb. "Her legacy shall forever live on."

Diahann Carroll, who pioneered television with her starring role in the 1968 series "Julia," died Friday, her daughter Suzanne Kay confirmed to CNN.

Veteran journalist Cokie Roberts, winner of three Emmys and a legend and trailblazer in broadcasting, has died at the age of 75, ABC News announced.

Vernon Jarrett Medal To Be Presented To New York Times Reporter For Her Work In Coverage Of Hate Crime, Race, And Identity

It's been 18 years since the terrorist attacks of September 11, 2001, the day that never ends.

The destruction caused by Hurricane Dorian in the Bahamas has prompted several celebs to step up and offer their support. Barbados native Rihanna tweeted her support and said she is exploring how to help via her Clara Lionel Foundation.

Scooters Are A Huge Problem For Cities. No One Knows How To Solve It Yet.

In the Wild West of transportation, no one knows what to do about scooters. They appeared suddenly in many cities, triggering complaints of clutter and blocked sidewalks. When ridden, scooters emerged as sidewalk bullies — fast enough to unsettle pedestrians ...

A Chicago mother whose children had to use her cell phone at McDonalds to access the Internet; a Miami mother who had to use the Internet at a library to complete her homework. These were among the real-life stories David ...

Alice Walker, one of the premiere writers of the 20th Century, was honored in July by her hometown of Eatonton, GA for her 75th Birthday (Alice Walker 75). Hundreds of people flocked from all over the country to Walker’s birthplace ...

Fashion Gaffes Are A Reflection Of The Industry's Diversity Problem 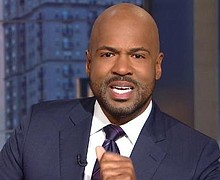 Baltimore did not take President Donald Trump's recent attack of the city lying down. Instead, Charm City was quick to stand up and fight back.

Founded by Mother Mary Lange, The Oblate Sisters of Providence was created to allow black women to enter religious life in the Catholic Church.