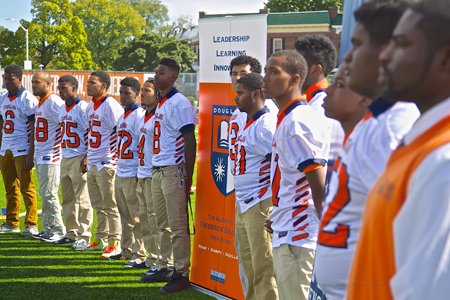 Courtesy Photo/Office of the Mayor

Members of the football team at the Academies at Frederick Douglass High School will have a full time academic coach this school year thanks to the new program launched at the school by the NFL Player Engagement (NFLPE) and the Family League of Baltimore on Thursday, September 26, 2013. The “1st & Goal” initiative is a pilot program funded by NFLPE that is based on its successful PREP platform to prepare, educate and support young student-athletes in all facets of their lives by promoting academic excellence and effective goal setting.

NFL Player Engagement (NFLPE), the Family League of Baltimore, and the Academies at Frederick Douglass High School kicked-off the “1st & Goal” initiative on Thursday, September 26, 2013 on Douglass’s newly renovated football field to provide Douglass student athletes with support services that help them succeed in their academic, athletic and out-of-school lives.