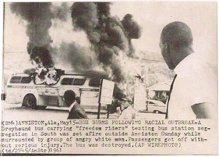 Moses Newson outside of a “Freedom Riders” bus which was firebombed by an angry mob near Anniston, Alabama in 1961. Newson was among those aboard the bus during the attack.

Braving the segregated South to get the story

Moses Newson and other members of the black press constantly subjected themselves to racial slurs, beatings, and other forms of attack as angry whites demonstrated their disapproval of integration. En route, they would brave the dark, winding roads of the South, where members of the KKK lurked and burned crosses.