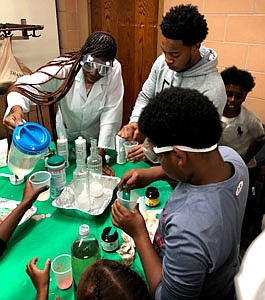 Motorcross Athlete Chino Braxton (middle) spends times with students in the B-360 Baltimore program during a surprise visit. Braxton spoke to the excited students at the James McHenry Rec Center, located at 911 Hollins Street in Baltimore about STEM and mechanics.