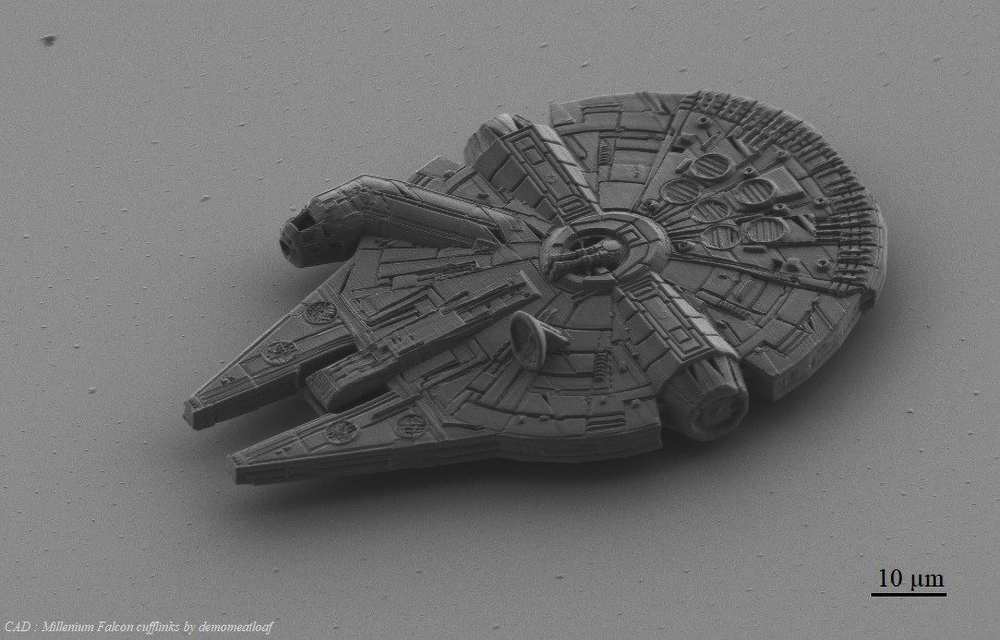 Microlight3D, which is based near Grenoble, France, created the tiny replica of the iconic spaceship from the films because several of its team members are fans of “The Mandalorian,” a live-action storyline for the famed sci-fi franchise that recently started its second season on the Disney+ streaming service.

The micro version of Han Solo‘s spaceship “measures 100 microns, which is the width of a single hair, or 0.1 millimeters,” making it almost completely invisible to the naked eye and requiring a microscope to admire its details, said Denis Barbier, CEO and co-founder of Microlight3D, in an exclusive interview with Zenger News.

The 3D printing company’s new advertising campaign is called “Jedi Masters Use Green Lasers” as competitors typically use red lasers, the same as Darth Vader and the other practitioners of the dark side of the Force in the movies.

Barbier said that to his knowledge, it’s the smallest model of the Millennium Falcon ever printed with 3D technology, adding that they use green lasers to print their tiny objects, “not only because the Jedi use red lasers but because lasers in that color allow for even greater resolution when printing.”

“Thanks to these green lasers, we can print even smaller details than we could with red lasers,” said Barbier, who views himself as “more Yoda than Sith Lord.”  Chuckling, he adds that it is nice to be on the light side of the Force.

Asked if the model could make the Kessel Run in less than 12 parsecs, as the Han Solo character famously boasts it can, he laughed and said: “I don’t know about that, but one thing is for sure, the photons that we used to build it were traveling a lot faster than that. They were going at the speed of light.”

As the replica is 400,000 times smaller than the original, it would need to be piloted by a bacteria-sized Han Solo and Chewbacca.

The 55-year-old CEO admitted that while he hadn’t himself seen the “Mandalorian” series, many of his employees, who are a bit younger, are huge fans. He did reveal that the first time he ever set foot in a cinema as a child was to see the original Star Wars film (“Episode IV, A New Hope”) and that his favorite character was Princess Leia.

With a strong background in developing laser technology, Barbier said that he had always been interested in science and that seeing all the special effects when the first film came out made a huge impression on him.

He said that Microlight3D, which was founded in 2016 and in 2019 printed a Yoda model measuring just 80 microns, specializes in miniaturized 3D laser printing technology. Most of its customers work in the medical, microtechnology and biological sectors. Applications for its products in medicine, for example, include miniature robots capable of delivering medication to specific parts of a patient’s body and performing micro surgeries.

But he also said that the technology was increasingly being used in everyday objects, including the car industry. He said that the potential for future applications for such futuristic printers is huge and that it often seems “like science fiction.”

Barbier’s predictions on the growing size of the 3D market are backed by a variety of sources.

“The global 3D printing market size was valued at $11.58 billion in 2019 and is expected to expand at an [annual rate] exceeding 14% from 2020 to 2027,” a study on the sector by Grand View Research said. “Globally, 1.42 million units of 3D printers were shipped in 2018 and this number is expected to reach 8.04 million units by 2027. The aggressive R&D in 3D printing and growing demand for prototyping applications from various industry verticals, particularly healthcare, automotive, and aerospace and defense, are the factors expected to drive the market growth.”