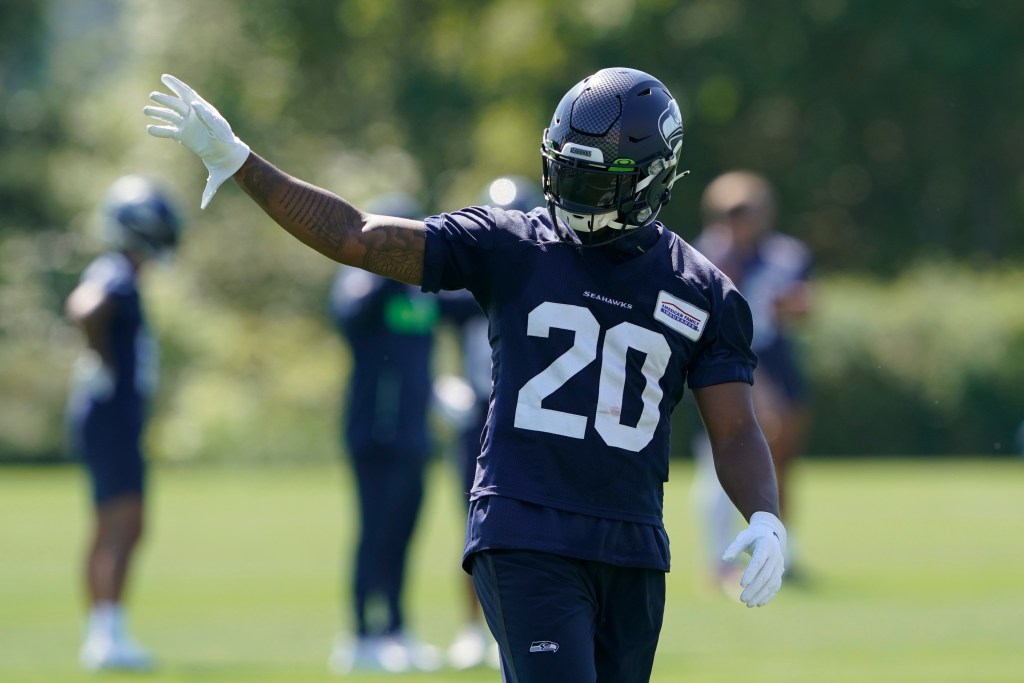 Seattle Seahawks running back Rashaad Penny has some breakaway ability and can catch the ball out of the backfield. It shouldn’t take much to get the Seahawks to part with the back they once thought would be their workhorse. Photo Credit: USA TODAY Sports Images

The Baltimore Ravens suffered a major setback when starting running back J.K. Dobbins tore his ACL in the team’s final preseason game. Dobbins flashed as a rookie last season when he gained 805 yards (6 yards per carry) and scored nine touchdowns.

Ravens head coach John Harbaugh opened up about playing starters in the preseason when asked if he regretted the decision now that Dobbins got hurt.

“We played the whole offense for nine plays; I think it was. Those guys played for no more than 23 plays the whole preseason— that’s what J.K. [Dobbins] had,” Harbaugh said on Monday, August 30, 2021.

“Some teams play their guys a lot. I watched certain teams— you know who they are— [and], they’ve played their starters every single game extensively. A lot of teams in our division have done that. Great teams in the AFC [and] teams that we’re competing against in the AFC have pretty much all done that. “

“But there are other teams that don’t play their guys at all; they don’t play their starters even one snap. We are probably as close to that as we’ve ever … I know we’re farther down that road than we’ve ever been; we played our guys so little this offseason. It’s just been how we’ve done it. But any time a guy gets hurt, you ask yourself those questions.”

Dobbins and Gus Edwards figured to be a potential one-two punch this season. Now the Ravens have to find another back to take his place. Here is a look at three options to replace Dobbins as well as one in house possibility.

“He’s [Williams] good,” Harbaugh said. “He’s done a good job. He hasn’t really dropped any passes out here. He’s good in pass protection. He can run routes. Yes, I feel good about him that way.” Williams at 6-0, 220 pounds fits the Ravens preference for big backs. He’s also been with the team since camp so he knows the scheme and should be comfortable being thrown into the action.

Trade: Seahawks RB Rashaad Penny Penny was the Seahawks’ first-round pick in 2018. Injuries and the emergence of fellow running back Chris Carson have detailed Penny’s career in Seattle. Despite being 5’-11” and 220 pounds, Penny has some breakaway ability and can catch the ball out of the backfield. It shouldn’t take much to get the Seahawks to part with the back they once thought would be their workhorse.

Other options are Rex Burkhead from the Patriots; and David Johnson from the Texans

Reuniting: Mark Ingram Yep. Whoop! Whoop! Why not give Ingram a chance to come back to Baltimore? Ingram made the Pro Bowl with the Ravens in their magical 2019 season. He finished with 1,018 rushing yards and ten rushing touchdowns to go along with 26 receptions for 247 receiving yards and five receiving touchdowns that season.

Ingram was released by the team in January and picked up by the Texans in March but have a logjam at running back. It’s a perfect opportunity for a low-cost trade that would bring a fan favorite back to Baltimore.