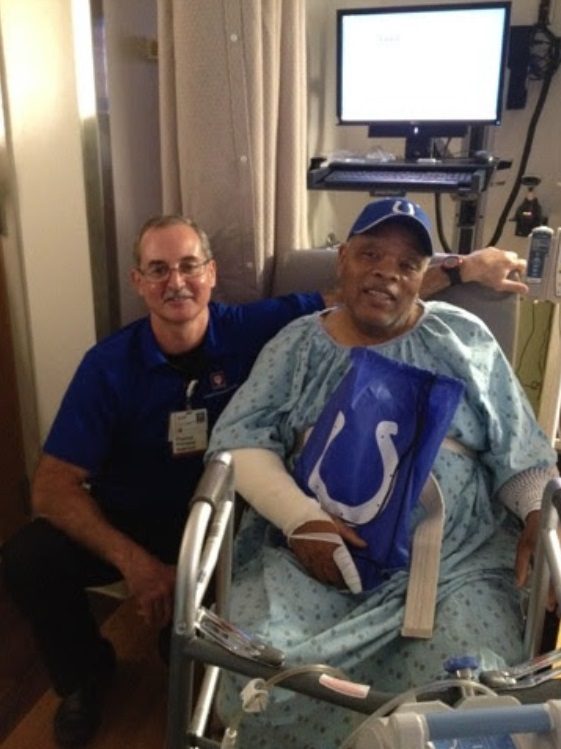 The name “Russell Allen Hill” is likely one that you may not know, but it’s a name that you should.

“I was just backing up my truck at the house when I heard dogs barking,” Mr. Hill said. “I heard a child yelling. At first, I thought it was just a kid playing with their dogs. Then the screams became louder.”

He got out of his vehicle and saw two pit bull dogs attacking a young boy.

“I looked around for others to help the little boy, but no one else intervened,” said Hill, who was 60 years old at the time. “I couldn’t just stand there and watch those dogs attack the boy. He was such a little guy. And those dogs— they were killing machines. They were not pets.”

The boy was 12 years old at the time.

Hill grabbed a log— he didn’t have much else to fight with— and hit the pit bull dogs a number of times. He was successful in getting the two pit bulls off of the child, and he then pushed the little boy through a fence. Then the pit bull dogs turned their attention to him.

“The pit bulls did not seem to have any problem taking me down— and I was about 240 pounds,” said Hill.

The attacks were brutal. They slammed him to the pavement, twice. His hearing is still affected years later. The pit bull dogs tore off his clothing and bit him all over his body. They attempted to rip off portions of his fingers and his left foot. The attack lasted for about four minutes.

Then the rescuer was rescued himself. A hero in the uniform of the Indianapolis Metropolitan Police Department arrived on the scene.

“Officer Michael Darst is our hero,” said both Russell and Clarissa Hill.

“He made split-second decisions that saved my life,” said Hill. “As Officer Darst tried to get the two pit bull dogs off of me, the pit bulls went after him. He shot one of the dogs— several times— to put it down. The other dog ran from the scene and was later taken.”

“Had Officer Darst not arrived and taken the actions he did, my husband would not likely have survived the attacks,” said Clarissa Hill. “We are forever grateful for what Officer Darst did that day.”

Hill was taken to Indiana University Health Methodist Level One Trauma Center. He spent more than two weeks in the hospital. He had two blood transfusions and five surgeries to try to repair the damages done by the two pit bull dogs.

The child saved by Hill survived the brutal attacks by the pit bulls. Prior to Hill coming on the scene, a woman had tried to stop the pit bulls from attacking the child.

“I was told later that the woman had used tree branches and a fire extinguisher to try to get the dogs off of the boy, but that didn’t work,” Hill said.

It was moments later that he took the actions that ultimately saved the child.

“Those pit bulls were biting him on his legs,” Hill explained. “They ripped his clothes off his body. There’s no doubt that the pit bulls would have killed the child. He was such a little boy, small for his age. It was horrific.”

Reports indicated that once Hill got the two pit bull dogs off of the boy and got the child through the fence, a neighbor wrapped the child in a blanket and took him from the scene. The child was then taken to Riley Hospital for Children at Indiana University Health for medical care.

On September 24, 2015, the Carnegie Hero Fund Commission of Pittsburgh announced that Russell Allen Hill was being awarded the Carnegie Medal: “The medal is awarded to those who risk their lives to an extraordinary degree while saving or attempting to save the lives of others.”

Though he sometimes still needs a cane to walk, Russell Hill is pleased that he was able to help at that critical moment on November 2, 2014.

Today, both Russell and Clarissa Hill are retired— Mrs. Hill retired in 2016— and still live in the same home in Indianapolis. Given everything that happened— the physical pain, the trauma, the financial concerns, everything  when Hill was asked if he would do it again, without hesitation, the answer was, “Yes!”

Russell Allen Hill is a name people in America and beyond should know.