Baltimore— Comcast announced the addition of Dawn Kirstaetter as Director of Government and Community Affairs for its Beltway Region. A native of West  Baltimore and former Deputy Mayor for the City of Baltimore, Kirstaetter will be responsible for leading Comcast’s government and community affairs efforts for Baltimore City, Baltimore County and Carroll County. In her new role, Kirstaetter will leverage her expertise in partnering with city and community leaders to build upon Comcast’s decade-long commitment to close the digital divide for residents and businesses in need through programs including Internet Essentials, Lift Zones and Comcast RISE, while also managing relationships with policy makers and community organizations. “We are thrilled Dawn is joining our team as her proven leadership and passion for the communities we serve will add to our ongoing efforts to keep our customers connected, informed and supported throughout the Baltimore area,” said Misty Allen, Vice President of Government and Regulatory Affairs for Comcast’s Beltway Region.

Prior to joining Comcast, Kirstaetter served as Deputy Mayor of Baltimore, where she worked closely with the Mayor and City Schools on various efforts to expand educational opportunities for Baltimore’s children and youth, including the 21st Century Schools Project. During her tenure as Chief Operating Officer and Vice President of Strategic Partnerships and Advancement at Baltimore City Community College, she led the institution’s community engagement, marketing, and fundraising efforts. As Chief Operating Officer at Associated Black Charities, she led the day-to-day operations of the organization and convened large scale events to spotlight local leaders, provide networking opportunities for women, and create awareness about systemic racism and social justice.

“Baltimore gave me a strong foundation for success, and I’ve committed my life to giving back by empowering young people and advocating for programs and resources to help them achieve their dreams,” added Kirstaetter. “Comcast shares my commitment to Baltimore, and that’s why I’m proud to join this team and work with the Mayor’s Office, the City Council and community leaders to build solutions tied to digital equity, workforce development, and digital skills training.”

Kirstaetter is a graduate of Baltimore City Public Schools and received a Bachelor of Arts degree from Georgetown University and a Masters of Social Work from Clark Atlanta
University. She serves as a board member for several Baltimore-based organizations including the Sinai Hospital of Baltimore, Parks and People, and the Visit Baltimore Education and Training Foundation. She is also a trustee for The SEED School of Maryland. 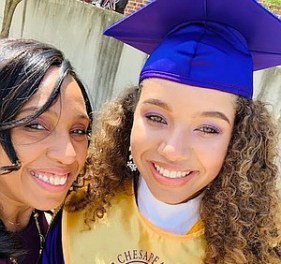